It is estimated that half a million people in the United States may have winter depression, and 10 to 20 percent suffer from a condition related to changes in the amount of daylight called seasonal affective disorder, or SAD. One possible remedy to help the afflicted through this difficult time is syntonics. Also known as optometric phototherapy, this branch of ocular science deals with the gentle and safe application of selected visible-light frequencies through the eyes. It has been used clinically for over 70 years as an alternative to traditional eye care in treating conditions like eye turns, lazy eye, reduced peripheral vision and depth perception.

At the 1999 Syntonic Conference, Dan Oren, MD, PhD, researcher for Yale University and the National Institutes of Health (NIH) indicated that 50 percent of the entire blood volume in the body passes through the eyes in 40 minutes, and that there is a biochemical mechanism of light involving hemoglobin within the blood, allowing the eyes to be an appropriate portal for phototherapy treatment.

Through the application of selected visible-light frequencies through the eyes, syntonics improves vision problems. When light enters the eyes, however, it doesn’t only serve vision. Some retinal nerves connect the retina directly to non-visual brain centers such as the hypothalamus and pineal gland. These centers influence electrical, chemical and hormonal balances, which affect all body functions including vision. Years of clinical application and research have demonstrated that certain selected light frequencies applied by way of the eyes to these centers can produce beneficial results in the body.

It is thought that by applying certain frequencies of light by way of the eyes, balance can be restored in the regulatory centers of the body’s nervous system, specifically the sympathetic and parasympathetic nervous systems. This balance is known as syntony. Dr. Harry Riley Spitler developed the clinical science, which he called syntonics in the 1920s. The sympathetic system functions in actions requiring quick responses—fight-or-flight responses. The parasympathetic system functions in actions that don’t require quick response—the rest-or-repose or rest-and-digest responses. Clinical and basic research in the last decades about the impact of light on cells, tissues, blood, circadian rhythms and mood disorders has broadened the paradigm and increased the acceptance of light as a healing agent.

According to Dr. Ray Gottlieb, Dean of the College of Syntonic Optometry, the traditional syntonic therapy device, the Syntonizer, uses a white-light source placed behind colored absorption filters focused by a frosted collimating lens. Patients look down a 50cm tube at the 50mm-diameter frosted lens that appears as a glowing dot of saturated color (Fig. 1). The light can be steady or strobed. Early devices used carbon arc, but the light source after 1933 was incandescent. Today it uses a vibration-series 50-watt, 115-volt bulb (powered at 145 volts to increase color temperature) that delivers 1.4 lux at the eye (unfiltered). The glass filters mounted near the bulb are 24mm in diameter and range from 4 to 8mm thick. Several newer devices use more modern sources and other types of filters.

A series of approximately 20 sessions, under the supervision of a licensed practitioner, given over a four to five-week period, is recommended. Sessions consist of viewing the appropriately prescribed light frequencies for 20 minutes alone or in various pairings.

Colored light therapy through the eyes is used to stimulate biochemistry of the brain. Dr. Cari Solomon, a doctor of optometry, first experienced syntonics 15 years ago. At the time, she was having difficulty reading for long periods of time. As a ranked junior tennis player, she was also experiencing difficulty tracking the tennis ball while playing. She looked at purple lights and “within 10 minutes I felt a sense of calm, saw much clearer, and was energized.” She repeated this treatment a few days later and experienced the same feeling. “The shift in my ability to concentrate and feeling of well-being was extraordinary, so I began sharing syntonics with my patients.”

“I use deep purple for headaches, including migraines,” says Dr. Solomon. “This is also helpful for patients that have mental and emotional stress. Blue/green combinations are very helpful for eye strain or fatigue, night vision problems, blurred or fluctuating vision, poor concentration, reduced athletic performance, acute illness and allergies. Depending on the patient and their energy to start, I may use yellow/green combinations for these issues as well. Sometimes I change from one frequency to another during one treatment, depending on the patient’s energy. Adrenal-gland function is greatly improved by a red/blue combination.

“It is not an exact science,” she says, “but an art, and I use my years of clinical experience and intuition to help my patients.”

Although it may sound like an unorthodox method for treating visual conditions, syntonics is firmly grounded in neuroscience. Through the application of selected light through the eyes, syntonics treats and improves vision problems. When light enters the eyes, it doesn’t only serve vision, but effects certain retinal nerves connected to non-visual brain centers such as the hypothalamus and pineal gland. These centers influence all nervous system functioning including vision.

Nebraska Visual Integration Center is the only office in Nebraska to provide Syntonics Therapy services to our patients. Typically, syntonics (also known as light therapy, will be used as a supplement to office-based Vision Therapy. 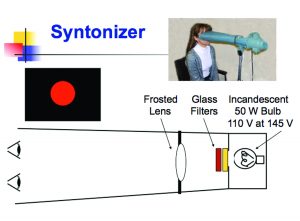